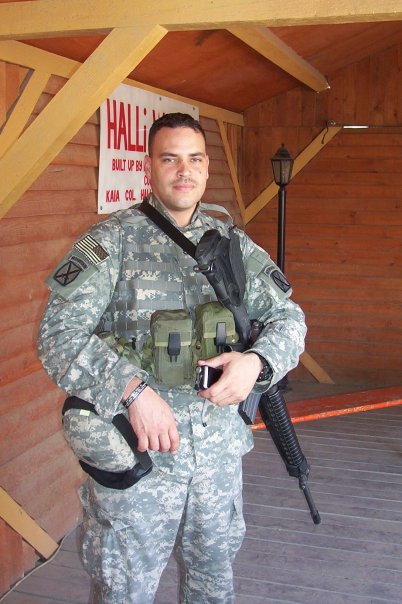 What motivated you to join the military?

I was attending college and had to move to part time because of the need to work and support my family. My loans matured and needed help paying them back. I was also looking for assistance with tuition, so I could earn my degree. Initially my plan was to serve 5 years and get out. I fell in love with being a Soldier and stayed for 22 years.

What was your primary job after training?

I started out as a Pharmacy Technician and stayed in that job the entire time. The only time I served outside of that capacity was during my time as a Platoon Sergeant stationed at Fort Drum (3 years, one of which was in Afghanistan) and as an Advanced Individual Training Platoon Sergeant. I trained more then 1,500 Soldiers in military subjects while they went to school to become Pharmacy, Radiology, and Laboratory Technicians.

Where did you serve the majority of your time after training?

Most people in the military do not stay in one place very long; I was no exception. I served at the following locations anywhere from 3-4 years each: West Point, Hawaii (two 3-year tours), Fort Drum (1 year deployed to Afghanistan), Fort Belvoir, Joint Base San Antonio, and Fort Bliss.

Did you receive any medals or citations?  Which are you most honored to have received?

Yes. I received the following: Meritorious Unit Citation-2, Superior Army Unit Citation-1; Meritorious Service Medal-4; Army Commendation Medal-4; Army Achievement Medal-4; Non-Commissioned Officer Professional Development Ribbon-3; Afghanistan Campaign Medal-2; Global War on Terrorism Expeditionary Ribbon-1; Overseas Service Ribbon-3; National Defense Medal-1; Army Service Ribbon-1; Nato Service Ribbon-1. The medal I cherish the most was my third Meritorious Service Medal. It was received for the work I did training new Army Soldiers and showing them what it meant to serve something bigger than themselves. I cherish that time above all else in my career. It was an opportunity to leave my mark on the future Army generation.

Tell me a fun/interesting experience you had that could only happen in the military.

One of the biggest things a leader can accomplish in the military is to build a cohesive team that supports each other and works together to accomplish a given mission. My first platoon at JBSA consisted of 34 Soldiers and I had them for 19 weeks. At around the 4-week mark, the team started to fail. There was resentment, in-fighting, and a basic lack of trust within the unit. I expressed my concern to them and told them they had better “fix it” or I would take the matter into my own hands. My student leadership failed to take me seriously. One of most treasured commodities to a Soldier is personal time. Most Soldiers did not have class or training on weekends. I informed the platoon that we would have an early formation (7 a.m.) on a particular Saturday and they were instructed to be in their Physical Training Uniforms. Outside of the barracks we had four huge logs that had the words Loyalty, Duty, Respect, and Honor painted on them. I split the platoon up into their four squads and placed the logs in front of each team. After a brief discussion of why teamwork and trust are an integral part of any military unit, we proceeded to conduct a two-hour PT session where they had to carry their logs as a team to complete tasks. After about twenty minutes, they realized I was not joking and decided to come together. One of my fondest memories is how by the end of that two hours, although tired, sweaty and sore, all 34 Soldiers had given a 150% of themselves to help their teammates. It was the most invigorating and emotional sights I had ever witnessed as a leader. For the rest of their time in my platoon, they never let any of their Battle Buddies fail at anything! Absolutely amazing to witness!

How has your military experience affected your life today? Besides waking up early and constantly utilizing military jargon in everyday conversations, my experience in the military has taught me the value of serving something bigger than myself. It has taught me that taking pride in everything you do should not be the exception but rather the rule. It has given me a deeper respect and appreciation of what it means to be an American citizen and that pride will never fade.

Is there anything else you would like to say about your military experience?

Even though there were hard times, countless hours, days, months and years away from family, I would not trade it for anything in the world. It is a part of me and has made me into the man I am today.